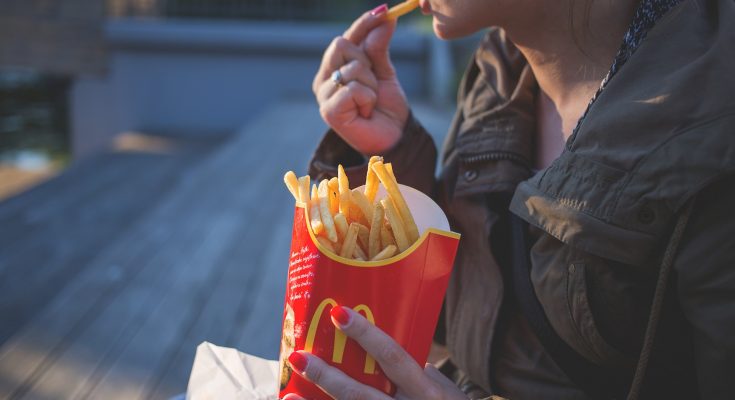 As a fresh-faced, wonderfully naïve 16-year-old, I was simply desperate for my first job.

Freedom, my foot on the career ladder, LOADS of money rolling into my bank account. When a job came along that didn’t require an interview, I leapt for joy.

Fast forward a year, and my stress levels have hit a Kilimanjaro-sized peak while my sanity levels are slipping ever further down into the abyss. Atop this, I’m clad in uniform which can only be described as deep baby sick mustard, accessorized glamorously with hollow eyes, assorted fryer burns (none of which were ever noted in the accidents book) and acne (caused by air comprising 70% grease). My McJob had ripped out my soul – dementor-style.

People tell me not to ‘exaggerate’, that ‘it can’t be that bad!’ Oh, really? Let’s set the scene. Daily, at 12pm, a stampede of parents baring whiny, hungry, rude child-monsters invade the store.

The queue is relentless, no matter how many happy meals you serve to appease them. This reoccurs at both 3 pm and 6 pm – lucky me. What’s more, the customers are downright bizarre. “I need a Big Mac with all the trimmings. No bun though, I’m on a diet.”

“Filet-O-Fish with extra sauce. Two shots of sauce ain’t enough and three is too much.” If you dare look to the boss for reassurance, his idea of ‘help’ consists of bellowing “MOVE THE SERVICE!” and sending stress skyrocketing.

Very helpful indeed. To top it all off, as a young McWorker, for an 8-hour shift, you’re likely to get £30 tops.